Monday and Tuesday at Duside Hospital in Liberia 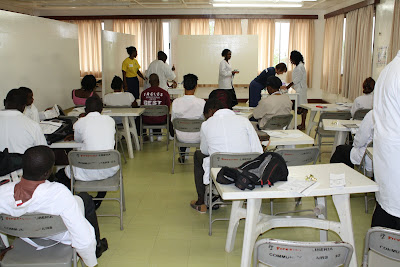 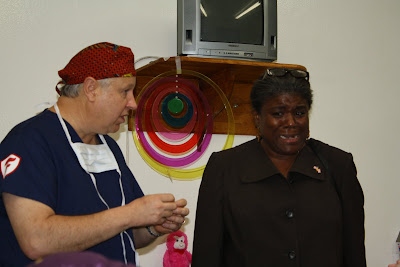 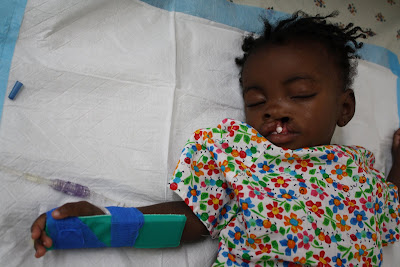 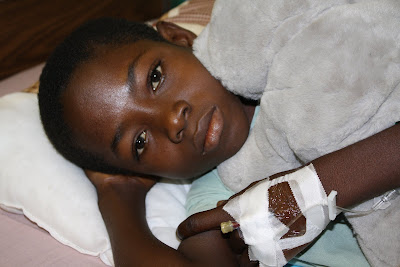 Monday and Tuesday in Liberia

Two very very busy days in every part of the hospital. After 23 patients on Monday, Dr. Steve Muehlstedt walked back into the Guest House and announced “that was by far the best run day of surgery I have ever experienced in all of my trips with CSI”. Go team go!!!

Monday also had Partner Katie Stewart and Sally Lannin visiting an AIDs orphanage for children and adults , run by Mother Teresa’s order of nuns. It was a very humbling experience. Team member Jody Pelkey donated a large bag of shoes. They then visited the Frances Gaskin orphanage and fed 80+ kids a great meal of rice jollof , cookies and Tang. Many went for seconds! Books were read, and donated to the school as well as a number of school supplies.

Today, Tuesday, was a very busy day with the U.S. Ambassador to Liberia Linda Greenfield visiting Duside Hospital. She spent time with all the team members as well as Dan Adomitis and his team from Firestone/Bridgestone. Ambassador Greenfield even had her first experience observing in the operating room. Patience and LouAnn of our team had the opportunity to spend more than 2 hours educating 20+ Liberian medical students in a number of areas. 21 surgeries took place today and by the time we left the hospital, the Peds ward was in high gear. Everyone wanted dinner, pain meds or to go to sleep. Parents as well!

I had an opportunity to speak at length with one of our patient’s father, who is 26 and studying computer science. Not only is he unusual in that many more mothers accompany their children than fathers, but he is far more educated than most. He spoke poignantly about being a school child in Liberia and hearing helicopters and shooting take place when Liberia was at war. He and his parents fled to Ghana and at times survived only on plants they found in the forest. Fortunately his parents were well educated and did everything they could to see to it that he got a good education after they got out of the refugee camp. He returned to Liberia in 2007 with a wife and child and an interest in continuing his education. His wife now teaches school and makes $60 US per month and he is studying and has a second child. I wished at that moment that I had brought an ipad to give this man so eager to learn. Another father had tried 2 previous years to get on the CSI schedule and finally “was accepted” this time with his son.

The day was saddened by one of the favorite Peds ward night nurses being in a serious car accident. She suffered significant injuries to her head and was brought into the OR for surgery by Duside’s Dr. Sherman. Dr. Lander of our team coached him on the eyelid repair and the good news is other than a nasty scar she should fully recover.

Tomorrow afternoon our second pediatrician, Dr. Tim Wood departs for the Twin Cities. This has been his first CSI mission and definitely not his last.

Posted by Children's Surgery International at 2:37 PM No comments: 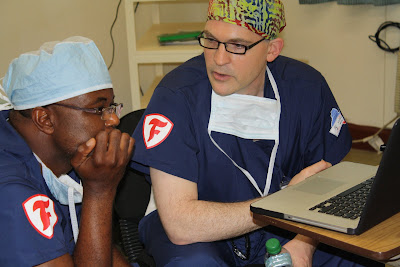 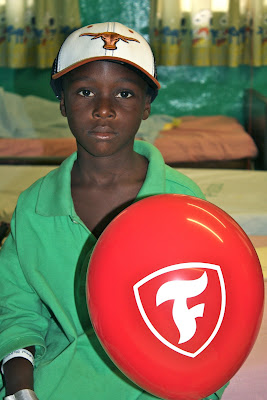 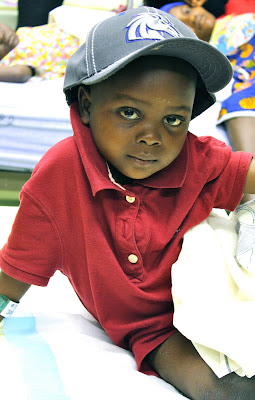 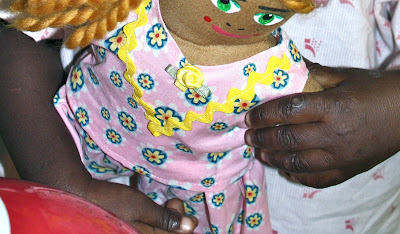 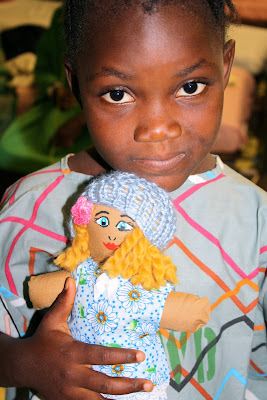 We left the Guest House at 6:30 am sharp in order to have the first patient on the operating table at 7:30 am. The first three patients (17 total today) were a proximal hypospadias, a huge umbilical hernia and a cleft lip. Dr. Lawrence Sherman of the Duside hospital participated in the cleft as Dr. Lander of our team is teaching him, step by step, how to complete these surgeries on his own. Dr. Lander was thrilled that Dr. Sherman was able to do much of two surgeries on his own with oral guidance.

The patients had been staying at the hospital overnight and hadn’t had anything to eat or drink since midnight last night. The staff and volunteers at the hospital have been extremely helpful. In particular, we want to give a round of applause to one volunteer who has returned from last year, a Physician’s Assistant student at Liberia’s biggest hospital, Mr. T.K. Abonoko Wiah. He has prepared IV’s, taken parents to the waiting area, comforted crying children and been invaluable as a translator.

We began handing out the beautiful hand sewn gift bags that have been so beautifully prepared by Benjamin Poore for his Eagle Scout project. Every girl patient receives a hand made doll from Dollies Making a Difference (a Pacific Palisades organization which reached out to CSI after reading an article about us in their local paper) and each boy receives a baseball hat courtesy of Zephyr Hat. School supplies, toothbrushes/paste, a school notebook, shampoo, soap and washcloth are also included in the gift bag.

One of the patients is a 13 year old boy named Menmeah who had an accident several years ago—his mother said he had fallen from the top of a tree through the branches to the ground. Ever since the accident, the boy has been having such difficulty urinating that he had to drop out of school and has been unable to attend for the past 4 years. He leaks constantly and walks with a rag between his legs. Because the boy’s father is handicapped the older 3 children receive school for free, but Menmeah is unable to attend. Dr. Dave Vandersteen operated on the boy this afternoon and pulled out a 3 inch stick that was lodged up inside him, now covered with calcification. When the doctor showed the stick to the mother after the surgery was complete, she burst into tears. Prior to surgery Menmeah was proudly showing the staff in pre-op (Katie Houle, Jan Martland and CSI Partner Katie Stewart) how he could write his name. He will be very happy to return to school, his mother says.

Tomorrow is another very full day with 23 surgeries. A few of the team members will be visiting an AIDS orphanage, and then traveling with Debbie from Orpha Relief and Rescue (orphanreliefandrescue.org) We’ll be preparing a meal, delivering clothing (one mother in Minnesota gave us all the baby clothes her twin daughters have outgrown).

Shown above is Dr. Lander briefing Dr. Sherman the Liberian physician performs his first cleft, two boys out of surgery sporting their hats donated by Zephyr Hat Company, and children with dolls from Dollies Making a Difference.

Posted by Children's Surgery International at 1:12 PM No comments: 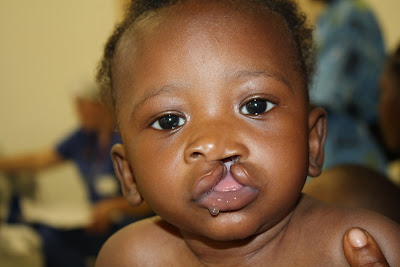 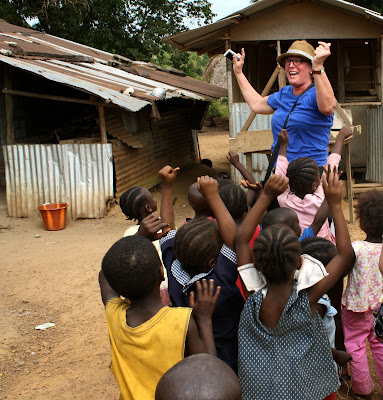 Shown here are the CSI team in the bus heading to the hospital for screening, a patient at screening, and Lora Koppel, team ward nurse and CSI Board Chairman dancing with children in a nearby village
Posted by Children's Surgery International at 10:10 AM No comments: 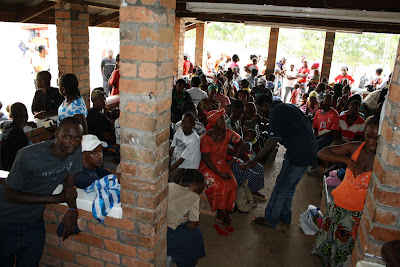 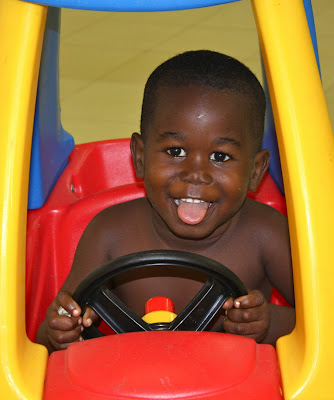 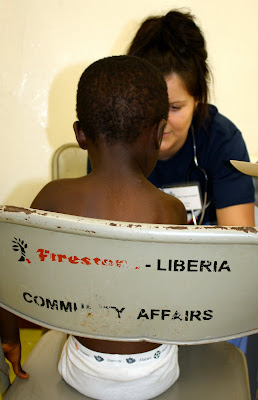 Yesterday we had a full day of screening at Duside hospital, and in the evening at dinner many of us felt it had been the most efficient, effective screening ever experienced on a CSI mission trip. What made a difference was having the surgeons positioned at the entrance of the hospital with Dr. Sherman, the local surgeon, who cycled his pre-screened patients to the appropriate surgeon who could make a quick determination whether or not surgery was possible before sending the patient up to get background information, vitals, a photograph and a screen by the pediatrician. We screened a total 109 patients, scheduling 104 for surgery. One woman had walked two days, and then taken a 7 hour car ride in order to get to screening; another walked two days and then took a bus for 4 hours. Dr. Tim Lander screened a number of cleft lips and palates, Dr. Dave Vandersteen a number of urological disorders, Dr. Steve Muehlstedt a number of general surgical issues, and the two pediatricians Dr. Dave Tetzlaff and Dr. Tim Wood screened everyone for surgical readiness. For example, does the patient have a fever, is he underweight, does he seem congested? Every single team member participated in some aspect of screening. Katie Stewart, this year's CSI Partner, teamed with medical records head Jan Martland to create a chart for everyone and get essential background information. Sally Lannin took before pictures of all patients, Joel Johnson ran logistics which involves just about everything, Mary Johnson and the other OR nurses Jodi Pelkey and Katie Sweet got the operating rooms readied. Lynn Randall and team Mary Randall, Dan Chow, Tammy Skidmore and Mary Dudley unpacked all the drugs and machinery for anesthetizing patients with the help of Dr. Ryan Rekuski, our anesthesiologist. Others including nurses Patience Kankeh, Michele Stewart, Julie Hampton, Lora Koppel, LouAnn Randall and clinical lead Katie Houle either took vitals, floated where needed, escorted patients to and from the lab etc. It was all hands on deck for a very busy 8 hours.
Today members of our team lead trainings for Liberian medical students and other professionals, as well as screened a few additional patients, although we have a very full schedule of surgeries for the next 5 days. Shown in the photos is team member Kristi Holton taking vitals on a patient, as well as a look at the patients waiting hopeful their names will be called, as well as one happy patient.
Posted by Children's Surgery International at 3:27 AM 1 comment: 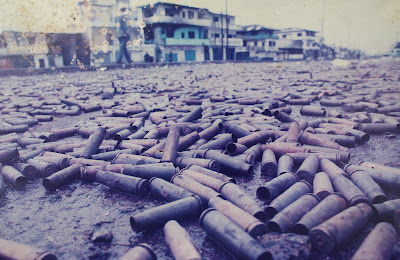 Arrived safely at Robertson airport last evening, and got to the Firestone Guest House safely, all accounted for, and all luggage in hand! Congratulations to our logistics team member this year, Joel Johnson, as well as all of the Firestone supervisory personnel dispatched by Dan Adomitis of Bridgestone Firestone and his team. We were met by wonderful Lillian, all of the Firestone staff, and many familiar faces as this is our third year back. In bed relatively early for everyone, and day one spent touring the capital of Liberia-- Monrovia. We stopped at a museum, a marketplace, the first church of Liberia where the repatriated slaves worshiped after the Emancipation Proclamation gave them the option of being returned to their home continent of Africa, saw the US Embassy as well as the new UN building. The day also gave us a good chance to have a rest day as we hear tomorrow, screening ,will be very busy. A stop at the beach on the way home to see where the Atlantic Ocean meets the western coast of Africa, and back to the Guest House for an orientation talk by Dan Adomitis and our first team meeting led by Medical Team Lead Dr. Tim Lander. Shown in the pictures a photo displayed in the museum of what the streets of Liberia looked like following the Civil War, which ended in 2004; the streets literally littered with bullet casings. Also is a reflection in a new building in Liberia as well as a busy street corner in Monrovia
Posted by Children's Surgery International at 10:01 AM No comments: